Olympics and the Tax Party

Yesterday was a long day, and pretty interesting. We didn't have class yesterday, but we woke up at 6:00AM, and we were taken to the south campus of Jilin University, where a sports meet was being held. We participated in the opening ceremonies. The international students of Jilin University were given t-shirts, and we were to walk with all the other faculties' students and professors. It was kind of like the opening ceremonies of the Olympics, only on a smaller scale. There were lots of people attending them though, and the crowd was grouped in different sections, some with parasols, some with the cards forming a Chinese character I didn't recognize (in fact, it looked like Japanese), and some sections waving pompoms. There were about 1,000 spectators, and we paraded in front of them. The math department was surprisingly disciplined, walking in step and shouting their slogan clearly. Our logan was "Friendship First, Competition Second." Some students got tired of waiting in line to parade in the stadium, and started making their own slogans, like "Rest First, Study Second". Silly people. 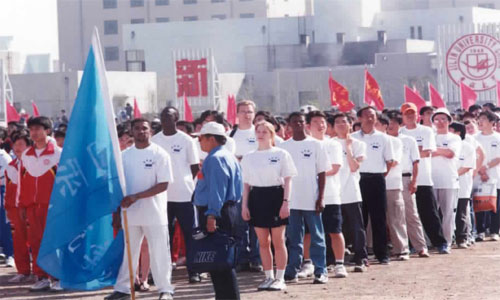 The sports meet consisted of kung fu demonstrations, kick boxing, and of course, track and field. We didn't stay long thought, because it was hot, even at 7:00AM when the parade started. We ate some really good cold noodles at the south campus cafeteria. Then we were bussed back to the north campus, where most people napped, but I went to the Internet cafe. Then, after lunch, some of the girls, one of the girls' boyfriend (who's came to visit from Hong Kong), and I went with Wang Laoshi, one of my Chinese teachers (it should be noted that all my teachers are female) to go shopping for custom made Chinese dresses. Nobody bought anything, but the fabrics they looked at were beautiful. On the way to the market, my white t-shirt that I got at the sports meet got dirty from wearing the seat belt in the taxi. Apparently, most cab drivers recommend not wearing the seat belt, but my cab driver didn't tell me. I don't know what it is with me and white t-shirts. No matter how hard I try, I always get them dirty the day I wear them.

In the evening were invited to a party held by the Tax College (that's what it's called, and guess what they study there?) and we were all given gifts, which were vases and plates with Chinese artwork on them. I don't know how I'm bringing mine back, or if for that matter, but it was something nobody in our group expected. We were treated to some dancing, Mandarin songs, a Japanese song (sung by a Korean-Chinese), and two Cantonese songs. I was most impressed by the Cantonese songs, because they were sung by the English teacher, who never lived in Guangdong province (where Cantonese is spoken), does not have Cantonese parents, and for that matter never learned to speak Cantonese. He just copied the pronunciation of the song, and my Cantonese roommate said he was about 85% right. Not bad, I say. Then there were some bad jokes by the Chinese hosts, and, just as I thought, they asked if anybody had a joke to share. I volunteered, and told my dad's famous penguin joke. Those who don't know the joke, you should ask me to tell it sometime. But I put it a Chinese context, so instead of penguins, I used pandas, and instead of the San Diego zoo, I used the Changchun Animal Park. The Chinese students there didn't get it initially, but the English teacher understood it, and translated it. It got a pretty good laugh after he told it in Chinese. We also played some games, like musical chairs. Musical chairs is invariably a violent game, and this time was no exception.

After that, some of the girls wanted to eat, and I came along. I was under the impression that we were going to find a desert place, but ended up eating jiaozi (Chinese dumplings). They were pretty good, and cheap too, but some of the girls complained today of stomach problems, so we might avoid that restaurant in the future. I didn't have any problems though.

Yesterday was a long day, starting at 6:00AM ending at midnight. My roommate came home later than I did, but I didn't notice until this morning. I was pretty tired, and today I slept in (finally!), but there was construction outside our hotel window (on the 9th floor!), and that woke me up. I didn't sleep in as late as I wanted to, but there was hot water in the shower this morning, so I can't really complain. I didn't study yesterday, and should probably get studying this weekend. We're doing one lesson a day, which is different from my Chinese class at SFU, which was a lesson a week. I am learning a lot though, and I think I found my groove with the characters. A couple hours of studying after class seems like enough.

At the party, one of the students, a girl, asked me who my favourite singer was. My favourite singer is Bjork, but I wasn't sure if she'd know who that was, so I started by saying she was from Iceland (I said it in Chinese: "Bingdao") and she instantly said Bjork. I asked her who her favourite singer was, and she said Ricky Martin. The Chinese are by no means isolated from Western popular culture. There are still filters of course, as many Internet sites are blocked by the censors. And we were talking to Eileen, our guide and interpreter in Beijing, about Stalin and the former Soviet Union, about the millions who died under that regime. She remarked, sensitively, that we had a different educational system, which we later interpreted to mean that the Chinese people don't hear about that side of history. Democracy is a long way from happening in China. Even still, capitalism is taking hold, and China is more and more a Communist state in name only.

Tonight we are invited to a barbeque held by some of the international students, and Sunday I am giving a talk to some high school students going on exchange to Vancouver college on what to expect from Canadian culture. Monday is a trip to Jilin City, which I hear is very beautiful, and might include a boat trip across the lake there, so no class on Monday either. Looks like I have a restful weekend ahead of me.