A lot has happened since the last update, as always. We just got back from Harbin, which is a 4 1/2 hour drive north from Changchun. The first interesting thing wasn't in Harbin, but on the way there and back. I got my first glimpse of the countryside of China, and the small part I saw was vast. I saw rice fields and vegetable fields, and workers toiling all day in the sun. The countryside of China has played an integral part in Chinese history, especially the twentieth century. Even though the Communist Party started as a group of urban intellectuals, a peasant from a fairly well off family, Mao Zedong, was instrumental in convincing the Communist Party that the revolution would spring from the peasants, which made up (and still makes up) the vast majority of the Chinese population. After Mao Zedong stormed the cities (and betrayed the countryside by ruling from the cities), he launched the Great Leap Forward, a policy which called for the doubling of agricultural output every year and the collectivization of farmland, and caused a famine that killed tens of millions of people in a span of 3 years. The Cultural Revolution, another of Mao's disastrous policies, plunged the urban areas into chaos. The countryside was affected only when those who were purged were sent to the countryside, to "learn from the peasants". This just ended up further alienating both the urban population and the countryside from the Communist Party. The People's Republic of China was built from the blood and sweat of the countryside. Things have eased since the 1970s, but the government continues to subsidize the urban growth with food seized from the farms. 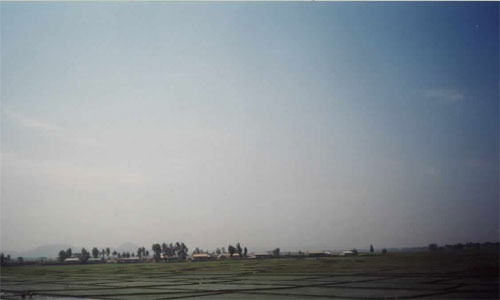 Harbin itself was okay. The hotel didn't have a shower (well, okay, it did, but shower water would have made us dirtier, not cleaner!). The first thing we saw was the Harbin Tiger Park. Okay, think of the movie Jurassic Park, when they were led through the park in automated Jeeps. Instead of automated Jeeps, we had a bus with no bars to protect us. We drove to the first couple of tigers, and they came up close and didn't even think of going after us. And the windows were wide open! Then a small truck (with bars) drove up, and the tigers got excited: feeding time. The driver of the truck threw out a couple of live chickens (yes, live chickens) and we got to see the tiger catch, pluck, and proceed to eat the chicken alive. It was a lot less violent than I expected. The chicken didn't try to get away when it was being plucked, and the tiger just took its time. Still, three of the girls in our group had to look away, and two of them were crying at the end of it.

Then we saw the Sino-Japanese Friendship park. Not too interesting, except there were some beautiful women dressed up in brightly coloured dresses who got married before we got there. Then we went to a Russian church, right in the middle of department stores. Totally out of place. And they were demolishing old houses behind it. This morning we went to yet another Buddhist temple (even though they are all very beautiful, they're really all the same). And then the Russian Market, which meant cheap 'Russian' souvenirs sold by Chinese people. Being Northeast China, there is a big Russian presence, but the only things they sold at the market were Russian dolls (you know, the ones where there is a doll inside, and then a doll inside that one?) and binoculars left over from the Russian Red Army.

While I was in Harbin, I was mistaken for Dashan (check out his website, it's worth it) not once, not twice, but 5 times!! That's okay, I let them point at me and think that Dashan had entered their stores.

Anyway, next week we go to Jilin City, which should be more interesting (plus we get to miss class). At least there will be a boat ride.

Harbin is a more developed town than Changchun, but the surroundings of the university (we stayed overnight in the dorms) aren't as nice as the North Campus of Jilin University. There was a field school from Calgary staying at the university there, but I didn't get to meet them. They were doing their thing and we ours. The South Campus is about a half hour away by shuttle bus from the North Campus. The North Campus is older, and closer to the downtown core of Changchun, while the South Campus is newer, but there is no night life and not very many stores. The consensus is that we are better off here in the North Campus than at the South campus, but I haven't been there, and hopefully I'll get to go soon.

This week is crazy. This Friday and Saturday we are supposed to participate in a sports meet, but I think it's track and field, not soccer or basketball. And Friday we are invited to a party with 40 Jilin University students, and we all have to come up with a performance. I've volunteered to read (or memorize, not sure which) a children's poem from a book that I bought. Another person is going to sing a song by Jacky Cheung, famous Hong Kong pop singer, and there might be a skit. And then Monday (Sunday is a rest day!) we go to Jilin City and come back.