Dinner and the Zoo

It seems like everybody's been to the South Campus but me. Apparently though, you need a student card everywhere you go, which none of us have yet. And plus, it's not close to anything, and most seem glad that we are in the older, North Campus rather than the newer South Campus.

Today was pretty exciting, and warrants an update. Class was uneventful, except for the fact that today we didn't have Wang Laoshi, who apparently likes me but not my roommate. We had Li Laoshi, who was a woman about the same age as Wang Laoshi, but she doesn't give preferential treatment. She does give out more homework than the other teachers combined, but I think she's okay. Better than Wu Laoshi, whom we understand, but whose voice makes us want to go to sleep.

Today, after class, I went to the Internet cafe and found out that the United States Congress granted China permanent normal trading relations, which is not essential for WTO approval, but certainly helps. The Chinese government, according to the state newspaper (there are only state newspapers here), is happy, but doesn't like the human rights provisions. No surprise there. Then I went with Sophie to the zoo. Since I can barely remember things that happened yesterday, if I'm re-introducing Sophie, I apologize. Sophie is a young woman that during some of my classmates' aerobics, came up to them and asked if she could talk to a 'pure' Canadian. My classmates, who are Cantonese but born and raised in Canada in English, apparently aren't 'pure' Canadians. They think she wants to talk to a white person, but wanted to be delicate. But my classmates suggested Andrea, who is Caucasian, but Sophie said she wanted a guy. My classmates think she wants a white boyfriend, and I'm starting to believe them. But Sophie, her English name, wants to practice the English she learned in high school, because she has an interview, entirely in English, for admission to a prestigious university in Nanjing. At least that's her story. So I met her on Monday, and we talked for about two hours, comparing how things were in China to how they were in Canada, and I showed my pictures that I brought. I knew they would come in handy: they're a good conversation starter. 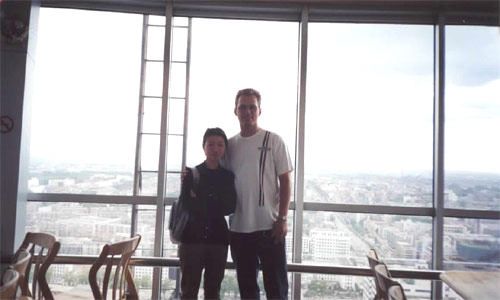 Today Sophie and I went to the zoo. The zoo is actually pretty close to the hotel, so we didn't have to walk far, and it was actually pretty big. I saw tigers, giraffes, and lions (first time I've seen all those animals up close). And of course the zoo has a panda, which we saw. One cage had dogs, apparently still not domesticated as they are in North America. I'm pretty sure she's looking for something more than just practicing English, but I've made a friend, and she wants to introduce me to her friends, and she has a friend at the hotel kitchen who might teach me how to cook a Chinese meal. That might be a challenge, because I can barely cook a Western meal. We'll see what happens with that.

Then, in the evening, we met our guide in Beijing, and pretty much our guide here in Changchun, Fang Laoshi. He's a cool guy, always in a chipper mood, and could probably drink all of us combined under the table, which we found out today. The restaurant was very busy, but, because we're foreigners (and therefore assumed to be rich) we had a secluded room, and two tables each with a propane stove. We were given a hot pot with boiling soup, and then came the lamb meat. We put the lamb meat into the boiling soup, waited for a couple minutes, then took the lamb and dipped it into the sauce. It was delicious. Then came the pijiu (Chinese for beer). Fang Laoshi kept on ordering beer, and I finally had to fill my glass with tea so that he couldn't pour beer into it. Everytime he filled our cup, he said "ganbei!" (bottoms up!) and we drank. Some of the girls even joined in. My roommate Benny got drunk, and the girls tried to take advantage of him by getting him to tell them what his girlfriend's name was, but he succeeded in frustrating them. Even in his drunken state, he knew that if they knew his girlfriend's name, they would bug him for the whole trip. I think he saw how I got bugged when my classmates told the rest of the group they thought Wang Laoshi liked me, and they still bug me about Sophie. But hey, I'm having fun.

My English lessons with Sophie is the only extra-curricular activity I have the energy for. Everybody else feels compelled either to wake up at 5:00AM and do tai qi, or do Shaolin kung fu in the evening. Some do both! Nope, not for me. I think I will go to class, study, rest, and have a weekly visit with a nice Chinese woman, and that will be enough. And of course the field trips. This weekend we are going to Harbin and Jilin City, and we're going on at least one boat ride, which I'm in favour of. The more boat rides the better, I think. Then in a couple weeks we should be going to Inner Mongolia, and some other time (not sure when), there is a nice boat ride in some caves. This trip is proving more and more interesting as it progresses.

I still have to change the date of my plane ticket to the second, but some of my friends are going to Shanghai, and I'm told it's not-to-miss. So far I've only decided that I want to go back to Tiananmen Square, except this time during the evening, when there aren't as many tourists, and when it's more tranquil.

So ends another update, and my day at the Internet cafe, which is conveniently close, but slow. There is apparently a faster one, but that means more walking. I'll try it, and see whether speed is more important than convenience. Plus it's really smokey in here, but I really shouldn't complain about that, because it's smokey everywhere. No WCB regulations in China.