I had my first day of class today, but before that, I want to talk about last night, the first night in Changchun. We had our reception, and my speech went well, I think. I talked to my buddy, Willis, and he plays a little bit of basketball, but he's more interested in soccer. So is one of the other male buddies, Lee. We talked for a while, and Benny, my roommate, brought up Falun Gong, but I changed the subject. Didn't feel right talking about it. 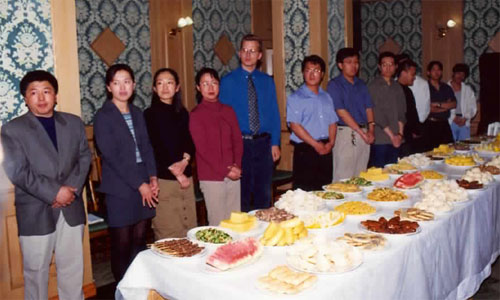 Then, the buddies (including a doctoral student, Daniel and two others who are still studying for their bachelor's) left for their residences, then a bunch of us wanted to see the park. Ended up we met with some Bolivian students who were living in Changchun for at least a year each, and had been studying in China for at least three years each. So their Chinese was very good. In fact, they were speaking Chinese to each other! They took us around, and showed us the park, which was very nice and peaceful, and we all are hoping to go back often. Then they showed us around the neighbourhood before leaving for their residences. They're going to take us to a nightclub on Friday.

Today was the first day of class, and before class we were all tested on our level of Chinese. I did okay on the written part, but during the oral part, the woman asked me questions I would have known if I had studied for just three months more. Then I understood the questions given to Benny (the oral and written exams were done with everybody together in the same room). So I asked for a second chance, and I had a better chance to answer, because the questions were simpler and I had some good answers. I didn't understand fully, but it meant that I understood some Chinese and didn't need to start right from the very beginning again. So there are three classes, and I'm in the middle class. The subject matter is the same (same textbooks for each levels), just more advanced talking than in some classes than others.

And we just bought four cases of water for the boys. That should last us about a couple weeks. It was only 120 kuai (24 dollars). Not bad, since it's for five guys.