Last night we had a 12 hour train trip to from Beijing to Changchun (about 1000km northeast of Beijing), and I just got in this morning at 8:00. So far today all I've done is get my hotel room (and switch to a different one because the toilet didn't work), and I went shopping with some of the girls. I bought a small notebook, just in case I need something to write on tomorrow.

Classes start tomorrow, and I wasn't sure what we'd be given in the way of school supplies. We met our 'buddies', although we haven't been paired up yet. I think two people are going to get one buddy, and that buddy is going to show us the ropes in Changchun. I was going to ask where the nearest Internet cafe was, but we already found that, and it's pretty good. Nice computers, and only liang kuai (about 50 cents) an hour. Or at least I think it's per hour. I'll find out after I'm done. And it's right near the hotel too.

Tonight is a banquet, and I think I have to give a little speech. I'm told it's okay to do it in English, but I might have to speak Chinese. Oh well, I'll think of something.

I'm a little sick from Beijing, because I was really tired after being dragged to various temples and such. We saw another Buddhist temple before the train ride, and it was nice, but I think I was all templed out. I do have a picture of the plaque for a Guiness World Record of a Buddhist statue carved out of a single tree, but out of respect for the Buddha, not a picture of the statue itself. It was at least 5 storeys high.

China is an interesting place so far, but it is very busy. The roads are packed with cars, bicycles and people, all competing (and the cars usually winning) for open spaces. We went to a nightclub on Saturday called "Rock And Roll" and if it were in Vancouver, it would be in violation of several regulations, not the least of which is the fire code. The dance floor was packed with people, with no room to dance, and to walk around outside the dancefloor I had to do as the Chinese: push my way around. Because there are so many people, it's the system that works. Yesterday before the train, we went to the silk market, which is in the embassy district of the capital, and there were lots of foreigners, but everything sold there was fake. Monica bought a Polo bag except the zipper had a different, unrecognizable brand name on it. A word of advice whenever in China: don't buy watches or batteries from markets. Dominic bought a watch for 90 kuai (16 dollars), and he keeps having to change it forward. 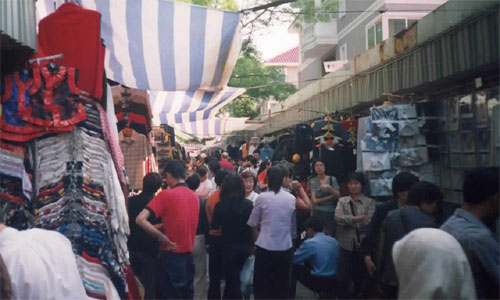 We couldn't find the Canadian embassy, but we saw the American, Sri Lankan, Vietnamese and Czech embassies. They were all well-guarded by People's Liberation Army soldiers, I think to keep any Chinese people not working there out.