I've been in Beijing for three days now, and we finally found an Internet cafe, about twenty minutes by taxi from the hotel.

The flight to Tokyo was long, like 9 1/2 hours. It actually wasn't bad. I watched a movie starring Bruce Willis and Michelle Pfeiffer. And as a group we managed to entertain ourselves. The flight attendants were very pretty and helpful, and I made sure I asked for water everytime I ran out. And the hot towels they gave at the beginning and the end of the flight were incredible. Then after finally getting to the hotel in Narita (a suburb of Tokyo where the new airport is) we headed for the local Buddhist temple, and an American pilot for Japan Airlines (the airline we flew on) showed us around the area, and recommended some good restaurants which we had to pass up, because we were only there for the night. But we found the temple thanks to his directions, and the neighbourhood was quiet but very pretty. Then we went and had fast-food seafood and rice, which was surprisingly good. The server didn't speak English, but we gave her credit for trying, and she was very helpful. On the way back we ran into the pilot again, who was heading back to the hotel himself. 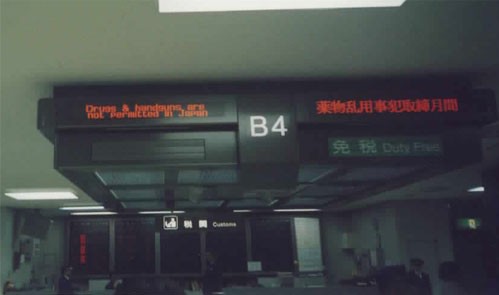 Next morning we flew to Beijing, and we were picked up by Fang Laoshi and Li Laoshi. "Laoshi" means teacher, and literally translated means "old master". Fang Laoshi is a fifty year old man, and Li Laoshi is twenty-something, and she has her bachelor's degree in English Language and is working towards her masters. Her English name is Eileen. After dinner at the hotel, we went walking down one of the streets. Now, in Beijing, the traffic system is very, very different. You must understand that pedestrians do not have the right of way, nor do the bicycles. Cars have the right of way, always. People are often waiting in the middle for a break in traffic to cross. And honking seems to substitute for shoulder checking. One honks when one wants to change lanes. Our bus driver, who is a very nice man, honks very often, sometimes it seems, randomly. Crossing the street is only scary, however, if you let it be. If you get in the way, you will be honked at and you get out of the way. That simple.

So, anyway, we walked down one of the main thoroughfares, the name of which I don't know simply because street sings are scarce. We ended up hailing some taxis to go to a nightclub, called the "Nightman Disco". Yeah, Nightman. And yeah, Disco. Nightclubs are discos. Just have to get used to it. When we got there we were too early, so we walked around the market outside for a while. It opened ten minutes later, and there was no cover, probably because we were "VIP" (i.e. foreigners). When we got inside, there was this sappy Chinese pop singer singing love songs. It got tedious. And the drinks were expensive (I paid 15 kuai, $3 for a can of Pepsi). But the pop singer finally stopped, and the DJ started playing some really good dance music. Not adult dance music, but rave dance music. There were all of two white people there: Andrea, who's in our group, and myself. But we had a lot of fun, and all of us danced (actually, the girls and I danced while the other men of the group got drunk).

The next day, yesterday, was very long. First on the list after a nice, huge breakfast, was Tiananmen Square. Everything I've read about this place doesn't give it justice. It is big and magnificent. I have a few pictures of myself in front of the huge portrait of Mao Zedong, leader of the 1949 Communist Revolution and ruler of China until his death in 1976. His policy failures included the Great Leap Forward, leading to a great famine, and the Cultural Revolution, leading to many unfortunate deaths among the intellegentsia in China. A whole generation lost out on education. But the Chinese Communist Party's evalutation of him remains to be 70% right, 30% wrong. I swear, the Communist Party has a number for everything. 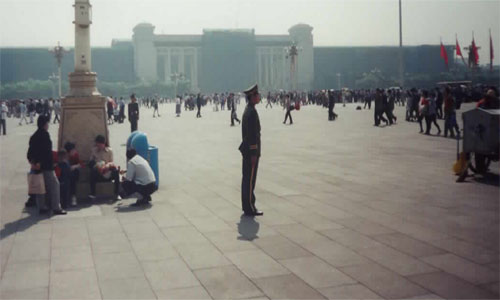 Then we saw the Forbidden City, which, as the name suggests, meant that in imperial days, ordinary citizens could not live there. Just the emperor and his entourage. But the Communists, being the good anti-imperialists they are, opened up the City as one of China's cultural showcases. We were led through the foreigner entrance (there being a different entrance for native Chinese). The Chinese have to wait in line, while the foreigners' entrance is lined with souvenir shops. I don't know what's worse, waiting in line or being hawked cheap crap. The Forbidden City was amazing, and I have a picture of one of the entrances where there are two small hooks above it, which were used to hang the heads of criminals to show who was in charge. 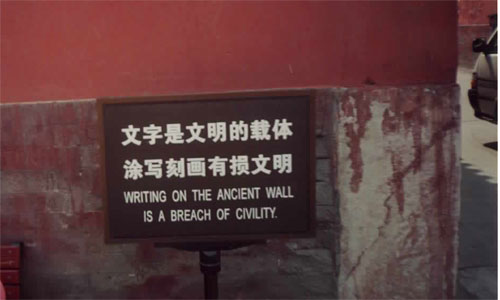 Funny thing happened in between going to the Temple of Heaven. We were having lunch (jiaozi, or dumplings), and a splattered some sauce on my white t-shirt. So I thought I would be going to the temple in a dirty shirt, but it turned out that somebody needed time to change the date of their return ticket, so the rest of us went shopping, and I got up the courage to look for a t-shirt. I took out my Mandarin phrasebook, and went around to the various mens clothes store in the mall we were in and asked the clerks in Chinese "you meiyou" (which means literally "have or not have") and then pointed to t-shirts in the little Chinese dictionary at the back of the phrasebook. The first clerk read it, and said "meiyou" ("don't have") so I went to the next store and asked the same thing. They had some, and then I asked "you meiyou 'XL'?", and they did. So with body language they told me I could try it on, and I did, and it was good so I bought it. I paid about $16 Canadian.

Another shopping experience in which I used my poor Mandarin skills happened yesterday. I was looking at some jade amulets, and one of them looked like something familiar, so I asked the lady there "shi Guanyin ma?" ("is that Guanyin?"). After she was startled to learn I knew some Mandarin, she responded, "shi, dui le" ("is, correct"). Then she said something I didn't know, and I said "wo bu mai" ("I not buy") to which she responded with "ni kan kan" ("you just looking")

Today we went to the Great Wall of China, and Eileen decided it would be best to go up the steep, non-tourist way, which she thought wasn't such a good idea after all. I got a bleeding nose about half way up, but after I recovered I made it all the way, and bought the requisite "I climbed the Great Wall" t-shirt, for about 15 kuai, or $3. Later we were offered one for 3 kuai, less than $1, but that was after the guy I was walking with said to the person offering it that I bought mine for 5 kuai. Then we went to the Ming Tombs, but they weren't too impressive. After that though, we went to the Summer Palace, and it was by far the best place we've seen. It was very relaxing. Well, except for the steps we climbed, but the scenery was beautiful once we got to the top of the Palace.

I've taken a lot of pictures, as you might expect. I'm trying to get pictures of old, traditional architecture and the new emerging skyline of Beijing. I'm calling them the "Beijing: Old and New" series. One time in Tiananmen Square, two pretty Chinese girls asked if I would be in a picture with them, and I happily obliged, but I forgot to get a picture of them and myself with my camera. Oh well, live and learn. I got a nice picture of myself with two children, both very pretty girls. That was today. I asked Grandfather "qingwen, tamen he wo, hao ma" ("excuse me, them and me, okay?") using the "can-I-take-a-picture" body language. I got one on my camera, and he got one on his. I can't wait to see them. All day I was thinking of getting myself and a little Chinese child in a picture, and I got the courage to do it. It's right you know: you get the courage after you do the things you're afraid of, not before. I'm also eating whatever they give me, and by far it's mostly been excellent food. Very greasy though, but no complaints here.

This is only the beginning, but I'm already having an experience I will remember forever.